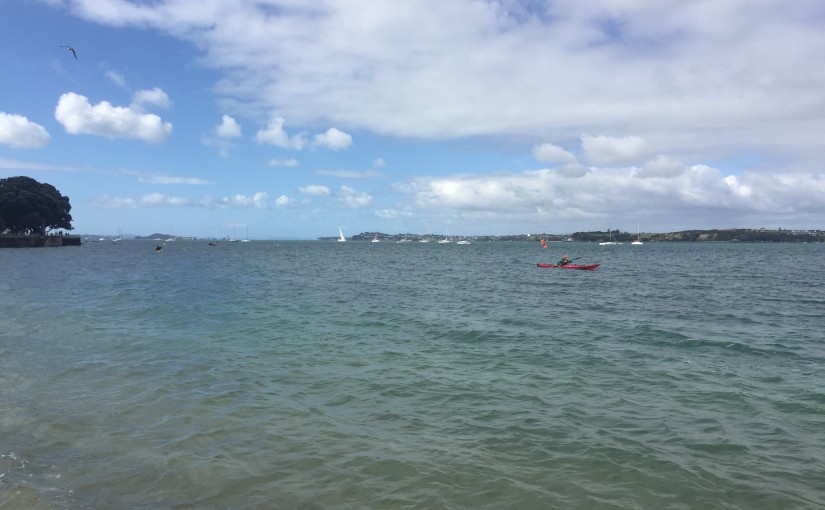 This weekend was the last big swim of the NZ swim calendar, the Auckland Marathon Swim. This year’s 10km event was actually 12.5km. As the course is tide assisted, the last thing the Masters Club organising the swim wanted was for swimmers to feel short changed.

The course started at Mairangi Bay, tracked along the bays, around North Head and into Devonport. I was very fortunate to have my kayaker from my Waiheke swim offer to kayak for me so had both a local and a pro to navigate and support which was fantastic.

We all knew that there was a bit of a south westerly on the forecast but that was at the back of our minds as we started the swim. Conditions in fact couldn’t be better with the sea like glass. Some of the Aucklanders were nervous about water temperature with recent drops but at 19c it was still above average Wellington summer temperatures.

As the race started we got away from the coast and into the current. I felt fast and could feel the tide assistance. The flat conditions didn’t last very long though. As I got close to my first feed I could sense conditions starting to change. It wasn’t choppy yet but I knew it was coming.

We continued to make fantastic progress and at my second feed my kayaker informed me that we had got to Takapuna. I’m not that great with my Auckland geography but this sounded positive and like we would complete the swim in no time at all. I had to adjust my expectations slightly when on the third feed my kayaker informed me a second time that we had got to Takapuna (he had got Milford and Takapuna mixed up at the previous feed).

As the water started to chop up I didn’t let this bother me and focused on my stroke. North Head was beginning to be in view so I figured that the end was in sight. This can be the most challenging bit of a swim, thinking you’re getting close when you actually have quite a way to go.

My kayaker seemed to be managing the conditions well but it was definitely a tougher event for him compared to Waiheke where conditions couldn’t have been better. At one stage (around North Head) he did make a comment that conditions were a bit hairy which made me think about some of the less experienced kayakers battling through. It sounds like it was almost more challenging being a kayaker in some parts!

I feed every 30mins which is also my way of keeping time. I had anticipated 5 feeds and hopefully under 3 hours for the swim. My fifth feed was as we approached North Head and in my mind I calculated that I was on my final feed and ‘just around the corner’. How wrong! My sixth feed was also at North Head so I’m not sure how much distance we actually covered in that 30 mins!!

On the final leg I could sense myself getting grumpy with the swim. Devonport hadn’t been ‘just around the corner’ and it was still a decent distance after North Head to the finish. As the swim finish came within sight we thought we better follow other swimmers and head around the buoy that was out from the beach. This seemed like extra unnecessary swimming when I just wanted to finish (and it turns out no other swimmers took that route after us!).

All the grumps were forgotten at the finishline. It is quite satisfying when you complete a swim that challenges you like that. It was much slower than I thought (3h35m) but I didn’t do too badly, taking out first non-wetsuit woman and first woman overall.

A number of swimmers didn’t finish and got a tow to the end. They had an even more challenging swim. They all swam 5 hours in conditions that were getting worse the longer the swim went on.

The Masters Club declared it well and truly a 13km swim.

An ocean swimmer from Wellington, New Zealand who loves getting out and into the ocean. It's not just about the swimming but also the personal challenge, the travel and the awesome people. View all posts by bekkyh

2 thoughts on “A marathon swim to Devonport”