As the swim season started here in the Northern Hemisphere I fully expected to have a calendar full of swims that I wanted to do, getting away almost every weekend. It hasn’t really worked out that way for a combination of reasons. First, I quickly discovered that I now have this continent called Europe to explore, taking a good number of weekends.  Second, there haven’t actually been that many swims (that I know of) that I’ve wanted to enter. In New Zealand I had already started to choose swims based on longer distance or, in the case of shorter swims, if I could team multiple swims up in a weekend. I also have no desire to wear a wetsuit or pay inflated prices for some of the popular UK swims, ruling out the vast majority of UK swims.

This is where the British Long Distance Swimming Association comes in. Longer distances, non wetsuit, and a team who organise swims for the love of the sport, not commercial gain. My first swim with the BLDSA unfortunately didn’t eventuate because of algae levels at Colwick Lake. But the 8 mile Torbay swim in Devon’s ‘English Riviera’ definitely made up for that.

It’s fair to say that I didn’t have high expectations for the English Riviera. I had images of a grey day and a cold rough ocean. And it sounds like that would perfectly describe Torbay 2016 from the stories I’ve heard. Torbay 2017 however was pretty magically. Stunningly sunny day with a beautiful ocean. Only minimal chop and no jellyfish (for me anyway – a couple of swimmers got stings). The water was still a bit chilly at 14.9c.

If I had one concern going into this swim, it was the temperature.  I knew it shouldn’t be a problem as I had been training at colder temperatures,  including early season swims at Dover and Parliament Hill Lido at 11 c. I’d also done a few chunky swims at 15-17c. But this was going to be my coldest temperature in an official event and at 8 miles it wasn’t exactly a short swim. This played out mentally.  For the first half of the swim my mind was turning over ‘this is a bit chilly’, ‘can I actually do this?’, and mostly ‘I can’t slow down or I’ll get cold’. Thankfully I became more comfortable with the temperature over the second half (also helped I think by the sun on my back) and mentally it was much easier as I knew I was over half way.

The ‘I can’t slow down’ attitude probably did me some good. I kept a good pace throughout the swim and was first female around the turning buoy. At my last feed I was told by my kayaker that I was only slightly ahead of the second female so the race was on for that last half hour. Unfortunately I was pipped in that last leg. But I was pretty happy at getting under 4 hours, getting in in 3h48m. 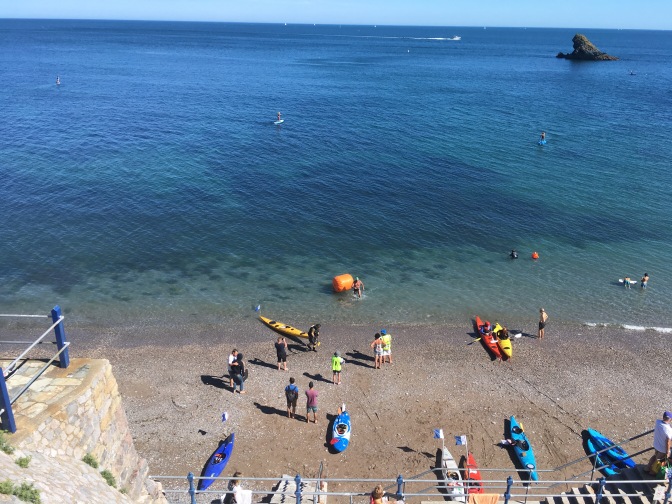 Rebecca is an ocean swimmer from Wellington, New Zealand who loves getting out and into the ocean. It's not just about the swimming but also the personal challenge, the travel and the awesome people. View all posts by Rebecca Hollingsworth